Game change includes two different kinds of activity. The first is a massive protest of the sort that shifts public opinion enough to change the political weather, redefining what is and is not possible under the current circumstances, and fuels active popular support. Such protest can either be a response to external events or generated by the movement. We call these sorts of protests trigger events. The second kind of activity consists of small actions that may not have the same scope as trigger events but still communicate to the public and help change the political weather.

From great mass protests, great social movements are born. Successful events use clear messaging, rich symbolism and captivating imagery to inspire and motivate participants and to make observers want to join in. These actions are designed to speak to, agitate, move and recruit the public. They do not include pressure on politicians or other decision-makers as a primary goal.

Large-scale game changing protests are known as trigger events. These are the engine for the resistance. They fill our ranks with people who want to help create change. They dramatize injustice and speak to core values. They give even those who keep to the sidelines a stronger connection to the message.

Smaller acts of protest and noncooperation also fall under game change. Students walked out of classes across the country to support sanctuary campuses. Yemeni bodega owners shut down their operations in New York City to oppose the travel ban. These actions demonstrate a refusal to allow abuses of power to be normalized. They target the public. When ordinary students or storekeepers disrupt business as usual in the face of injustice, anyone watching may be inspired to take a stand.

The movement can create game change from outside events

Watershed news events that occur outside the control of movements can result in game-changing movement responses.

In 2013, activists created #BlackLivesMatter in response to George Zimmerman’s acquittal for the murder of Trayvon Martin. The following year, Black Lives Matter organized mass protests in response to the killings of Eric Garner and Michael Brown by police. Polarized by the protests, few could ignore the issue of racial justice in policing. In this case, the horrific killings prompted trigger events in the form of game-changing protest actions.

The moments of intense protest that follow calamitous events generate the images and create the awareness that changes people’s hearts and minds. But calamity alone does not lead to protest. It is the movement’s ability to create trigger events in moments of crisis that will determine how effective and lasting those changes are.

Considered this way, the movement built a trigger event out of Trump’s victory. The day after the 2016 elections, more than 350 protests broke out in cities large and small across the United States. Within five days, activists announced plans for a Women’s March that would take place immediately after the inauguration. This march turned out to be the largest protest in U.S. history, with more than 4.2 million participants in more than 600 cities, and forced a brand new presidency into an unprecedented defensive crouch.

Game change can occur even in the absence of explosive or monumental trigger events. With small actions, protesters communicate the values and goals of the movement to targeted slices of the public. These actions don’t necessarily grab the national media spotlight or pressure decision makers. By creating polarization around an issue, however, they can force members of a community or a sector to take sides and thereby gradually change the game. 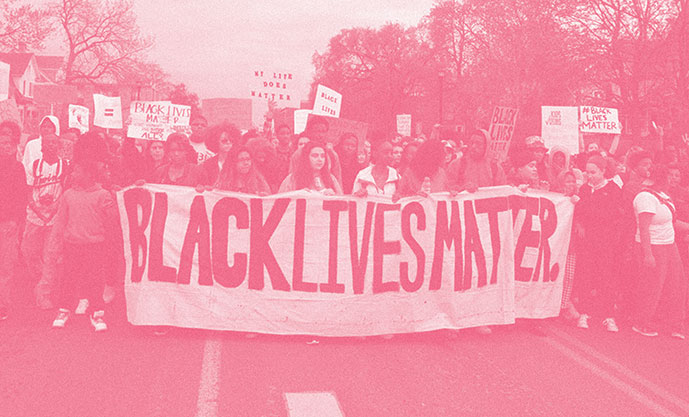 Certain actions can be duplicated week after week, or staged to similar effect in different locations. These types of activities are important—and many can be undertaken with little preparation or expense. Document them, share them on social media, and encourage your friends and followers to join you in them. They help to maintain a sense of urgency and keep the movement growing. In the dozens, hundreds or even thousands, these types of actions can move mountains.

Some game-changing protests that have shifted public discussion around an issue:

Game change protest, if successful, would shift public opinion firmly to the side of the movement and against Trump and the Republicans. Imagine if tens of thousands of people flood the streets in response to every unjust law, every committee vote that goes against American values, every executive action that threatens our democracy. Imagine if from these trigger events, everyday people working in small groups spin off hundreds of small actions to drive the message home in their communities.

Politicians who support the Trump/GOP agenda would see their approval numbers collapse and their legitimacy falter. As the political weather changed, the media would cover the resistance with admiration, not disdain. Trump’s presidency would start to be perceived as a failed presidency and would pull the GOP down with it.

Here’s how you can make that vision real: You can show up every time. Show up to long-planned protests and show up to spur-of-the-moment protests that turn new headlines into trigger events.

Bring a sign that speaks to the media or the public, and stay on message. One unified message repeated over and over is stronger than many disconnected messages.

You can’t count on the media to give protesters credit for change, so celebrate the impact of your protests and frame them as successful in light of subsequent events.

Follow up on large-scale protests with small actions in your community that elaborate on the messages of trigger events.

Consistent, rapid protest responses with strong messages have driven Trump’s approval rating down, inhibiting his ability to enact the GOP agenda. We should do everything we can to drive it down further. And the most important part of this is showing up.

You may not agree with every aspect of a particular protest. You may feel critical of certain messages and actions promoted by the groups that are organizing it. But that doesn’t mean you should disengage. The best way to contribute is to show up time and time again. Find the organizers and o er to help promote, organize or set up. The more protests you support by simply showing up, the better sense you’ll have of what works. (Existing resources can help you identify what works—for practical protest tips, check out BeautifulTrouble.org, which provides an online toolbox for grassroots action.)

Showing up is a muscle, and regular exercise of this muscle makes our movements stronger. If we build a movement that mobilizes every time democracy is threatened, we’ll see a culture shift. Politicians will run from Trump and the GOP agenda for fear of awakening a sleeping giant. That’s game change. 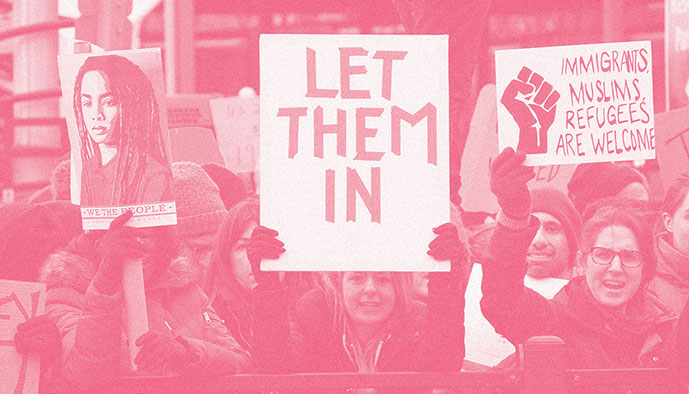 The Women’s March and the Airport Protests Were Game-Changing

From the moment Donald Trump prevailed in the electoral college—and thus won the presidency—the resistance was visible. Unrest erupted all over the country. Protests filled the days and weeks following Election Day as people took to the streets to express their grief and anger. Some observers criticized the protests, but the feeling of widespread disapproval proved contagious: Trump took office with the lowest approval rating of any modern president.

The day after Trump’s inauguration, four million people gathered together in 653 different cities to protest his presidency. The Women’s March was the biggest single-day demonstration in U.S. history. For many protesters—up to a third, according to a survey conducted by University of Maryland professor Dana Fisher—it was their first participation in any kind of civil resistance. Many others hadn’t protested for decades.

Public opinion surveys immediately after the march showed that the protesters had greater public support (50 percent) than Trump himself (44 percent). The pressure only increased during Trump’s first week in office. A new movement was springing to life. Tens of thousands started meeting in Indivisible groups, showing up at town hall meetings, participating in subsequent protests big and small, and calling their representatives.

Then the administration issued a draconian executive order targeting Muslims and refugees, banning the entry into the country of even those who had been here for years, with legal papers. In response, tens of thousands of people flocked to airports nationwide to demand that detainees be released. Many were mobilized through networks born out of the previous protests.

Those massive protests kept the spotlight on those declaring their resistance. The visibility of protesters’ anger helped keep support for the travel ban under 50 percent. Soon, a large base of corporate leaders, academics and law experts stood up to oppose it. With the active popular support of a movement behind them, the courts soon followed. The law was struck down by two federal judges.

In June 2017, the U.S. Supreme Court allowed the ban to proceed within certain limits while it considered its constitutionality. As writer Rob Hunter put it in a review, “It is more important than ever to form coalitions among organizations, to forge stronger bonds of solidarity and to build the social movement power of Muslims, refugees and immigrants… Only a mass movement will successfully fight the ban." 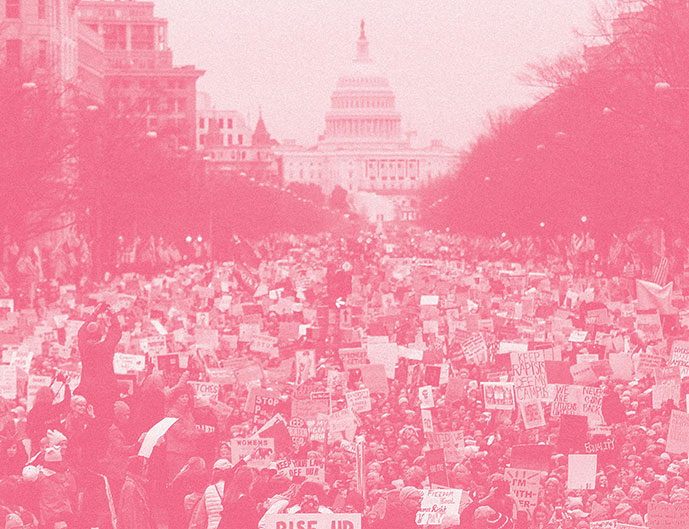